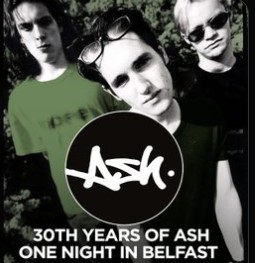 Back in August, I wrote about the many times that Ash has graced the Ulster Hall with their presence.

Since summer I have been so looking forward to the 30th-anniversary show because the Ulster Hall has many precious memories for me seeing bands play there and importantly for Ash, it was the venue I first saw them in 1995 when they supported Therapy? around Christmas time.

Christmas gigs are great too and Ash has played many Christmases shows over the years.

Tonight, we celebrate 30 years of Ash. Hard to believe that they are still going strong since their debut album.

I got down to the Ulster Hall with my friend Paul and we managed to catch a glimpse of the support band, Charlie Hanlon who also hails from Downpatrick. Think we only caught a couple of songs before they left the stage.

The gig had sold out ages ago and the anticipation was building amongst the crowd. You could see the BBC Radio Ulster team on stage getting ready to put the show out live on BBC sounds, so this had an extra special dimension to it as well.

Two intros are on as they signal the arrival of Ash on stage. We get The A-Team theme tune as well as an adjusted (Fl)ash intro like the cleaning product!

Hitting the stage without saying a word, Ash launch into an opening salvo of Goldfinger, Shining Light and A Life Less Ordinary before we get good evening, Belfast from Tim. Formidable start to the night and you can’t be any better than those bangers.

After Angel Interceptor, Tim takes us back to the very beginning introducing us to their first single, Jack Names The Planets which has the place jumping. Thirty years later and it still feels as fresh.

We have a couple of special guests lined up for the evening as well. First up is Backwater’s Barry Peak and Boyd Lowe joining the band covering their song Silver Surfer. They stay on for another offering from Trailer, Petrol which sounds impressive with three guitarists on stage.

If that wasn’t enough nostalgia for the evening, we get a rousing version of Uncle Pat. Does anybody remember it being featured in the Heineken advert all those years ago?

The biggest roar of the night from the crowd greets the opening bars of Oh Yeah which prompts a mass singalong with the audience. One of the best summer songs and it brightens up a really cold night too.

Following up is Sometimes which is just a beautiful song to listen to. We get another summer-inspired anthem, Walking Barefoot which goes down well with the crowd too. Strong song choices there from Free All Angels.

The next special guest is announced on stage and this time the band are joined by Nathan Connolly from Snow Patrol. Two absolute bangers from Meltdown are played – Orpheus complete with Rick’s drum solo and a fuzzed-up version of the Star Wars-themed Clones.

After Nathan leaves the stage, we get Arcadia which was the single-only release from the A-to-Z series. The new song Darkest Hour of the Night (which was included in their recent best of) follows with Tim letting us know that new material is on the horizon for next year. They are really spoiling us tonight.

A couple of more recent songs from their last two albums getting an outing. Confessions in the Pool from Islands and Let’s Ride from Kablammo!

Nu-Clear Sounds is such an underrated album, and I am in the crowd supporting the t-shirt that I bought for their first headline gig at Ulster Hall. To my delight, Numbskull is played with lots of arrghs! We get Tim versus the audience before Mark decides to blow us all away!

The place is getting warmed up now that you forget how bitterly cold it is outside the building. When you hear the rumbling noise of Bruce Lee and Jackie Chan, it can only mean one thing – Kung Fu to everybody’s delight.

Even Santa makes an appearance giving us some cool kung fu moves and zen meditation as well as breaking out into air guitar as somebody from the audience passes an inflatable guitar. That Santa fella plays well.

Santa is bouncing around the stage and Mark has gone AWOL. It doesn’t take long to notice that he has jumped over the barrier and into the crowd complete with his bass and playing away before he comes back onto the stage. “A good wee posse there” he declared. He certainly looked like he enjoyed it.

You really don’t get time to recover after that as we get Girl from Mars, prompting dancing, jumping, and singing along.

We are near the encore and the band gently leads us into There’s A Star with snow-like confetti blasting into the hall. This is the closest Ash will get to a Christmas-type song. I always thought Shining Light also has a Christmas feel to it as well.

No sooner have they gone off stage for the break that they come band on with another guest, this time Damian O’Neill from Derry legends The Undertones. Both Damian and Mickey Bradley collaborated on Buzzkill from the Islands album and Damian rocks it with the boys.

At this point, you’re thinking Teenage Kicks is going to be next as Damian is still on stage but what we get is unreal as Jimmy Nesbitt, appears for vocals and delivers it with swagger and confidence. Peeling off his jacket he is wearing a specially designed Northern Ireland football shirt with the number 30 on the back of it. Very nice touch.

I didn’t think much of his acting in the recent Bloodlands series but if he decides acting isn’t for him, he could switch careers!

We are now coming to the end as Tim speaks about how he doesn’t know what has kept the guys together after 30 years and Rick gives us the answer by declaring his love for his bandmates. And before we go home, we get a cracking version of Burn Baby Burn to close the night.

As the band leave the stage to rapturous applause from the audience the song of Harry Belafonte Jump in the Line (Shake Senora) is playing in the background as the guys dance off stage and come back onstage again dancing. You can tell they have had the time of their lives.

I’ve been to thirty Ash gigs over the years and this one was extra special for me.

Thank you, Tim, Rick, and Mark, for the music.

You can catch the stream of the concert on the link below: