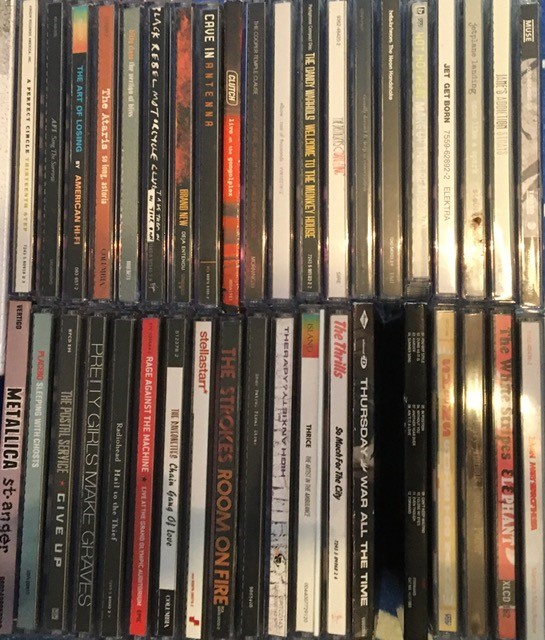 After last weekends poll, I was quite pleased that my three choices polled pretty well on the #3albums93 with my favourite album, Copper Blue by Sugar taking second place.

This weeks Twitter poll hosted by Richard Shaw takes us back to 2003 and after reviewing last weeks results it was down to doing some research. How many albums did I have from that year and who was going to be favourite?

At time of research I picked out about 39 albums from 2003 and forgot about four of them. Seemed to have missed Kings of Leon which I have. Other absentees included The Blood Brothers, The Movielife and Kinesis – all released albums that year that I have and totally forgot about.

One album that I didn’t have was Joe Strummer’s Streetcore which I just purchased this weekend. So that brought the 39 albums up to 44.

Usual favourites of mine released albums in 2003 – Radiohead, Muse, Black Rebel Motorcycle Club, Metallica , Therapy?, Placebo and Jane’s Addiction to name put a few. Snow Patrol would final hit the big time with Final Straw which was my first listen to that in years. I had kind of gone after they released the follow up, Eyes Open.

Between NME and Kerrang both magazines were championing new bands and I usually like to dip in and try something new. From NME it was Hot Hot Heat, Jet, Stellstarr*, The Shins, Kings of Leon and The Strokes. While Kerrang were going for new bands like Hell is For Heroes, Thrice, Thursday, AFI and The Distillers.

There was quite a good variety there. Some albums I really liked and some I didn’t which you will see from the top 44 later on the page.

I think from offset I had an idea who was going to be in the top 3. Radiohead definitely with Hail To The Thief which is a great album. Absolution by Muse was another of my favourite albums that year. So who was going to claim third spot?

It was going to be between The White Stripes and Black Rebel Motorcycle Club. Both released really great albums so I ended up going for Black Rebel Motorcycle Club who polled at 34th place and resulted in only having two of my choices in the top 10 – Radiohead came second and Muse were ninth . The White Stripes Elephant was the winner for that year.

After listening to all the contenders last week the most disappointing albums ended up being the ones by Elbow and The Dandy Warhols, closely followed by Hot Hot Heat. Overall I really enjoyed revisiting 2003 and the albums that I listened to. Below is my top 44, not quite a top 50 but close enough. My top 44 includes in italics the positions all the albums finished in Richard’s poll.

Well, that was fun! Next poll is going to be the best albums from the 2010’s so have two weeks to get the research done and start going through the collection again.