This is a review of the albums that I have been listening to whilst working from home. Albums listened to for week 21 covers from 10-14 August.

Another day at the “home” office and more tunes to listen to. Today I picked a variety of American rock albums with all different styles. I think a wee bit of everything. 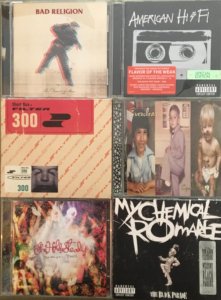 Bad Religion’s fifteen album (yes 15!) The Dissent of Man (2010) caught my attention around that time. I knew of the band but wasn’t familiar with their back catalogue but this album I bought after listening to some of their songs. They have released more albums after this too.

American Hi Fi were formed in 1998 by Stacey Jones (drummer from Vercua Salt) self-titled album from 2001 is a favourite of mine. NME described them as “The Blink 182 that think”. It’s a good fun album that doesn’t take itself seriously. I saw these guys live once in Glasgow and they were brilliant.

Filter formed in 1993 by Richard Patrick who was previously in Nine Inch Nails. Their debut album, Short Bus (1995) wasn’t the first Filter album I bought. I started listening to the band around 1998 when they had a song on The X Files movie, called One. Useless X File trivia fact – Robert Patrick who played Agent Doggett in the series is Richard’s brother. Hi Man, Nice Shot was a big single from this album. They mix the industrial metal sound with grunge.

The Hold Steady formed in 2003 and Boys and Girls in America (2006) was their third album. I started to listen to them before they came to Belfast in the summer of 2007 when they played at Tennent’s Vital in Belfast’s Ormeau Park. I really wanted to see them live but they were supporting Razorlight. Manic Street Preachers were also on the bill that day too but my friends opted to go to the second night, headlined by The Killers. Was a bit disappointed at missing that one.

Everclear from Portland, Oregon released Sparkle and Fade in 1995. I got this album shortly after hearing them on the Romeo and Juliet soundtrack. They formed in 1991 so would have been around at the time of grunge. There would be many comparisons with Nirvana but after a show with Foo Fighters, Dave Grohl said he didn’t think that Everclear sounded anything like his former band.  I found movie soundtracks are good ways to finding new bands to listen to.

My Chemical Romance’s (MCR) The Black Parade (2006) is a rock opera album very much like Pink Floyd’s The Wall and David Bowie’s Ziggy Stardust . MCR are considered an emo band but this album really does take it’s influence from classic 1970’s rock which lead singer Gerard Way citing both Queen and Pink Floyd as influences.

Music is a passion of mine and I like nothing more than following bands and going to gigs. This blog is a work in progress of documenting all the gigs I have been to over the last 30 years, bands and albums that I love. Hope you enjoy reading. View all posts by clarkie71