This is a review of the albums that I have been listening to whilst working from home. Albums listened to for week 20 covers from 3-8 August.

A new month. Who would have thought I would be still working from home by August? Lockdown restrictions are eased in many places as we try to get back to some sense of normality. Going to gigs seems to be a long way off at the moment. I have decided to keep the title instead of changing it as it is really my diary of what I have been listening to during the pandemic.

Kicking off the new month with a bit of US punk. I picked two albums by Descendents and three albums by Green Day. Also included is a NME CD called Generation Punk which is pretty good collection of old and new punk groups. 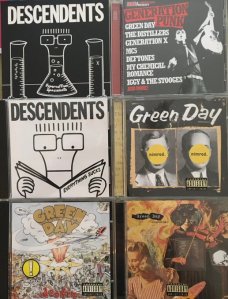 I started off with this CD first and there were some really great songs on it – Knowledge by Operation Ivy (which is often covered by Green Day live), The American Ruse by MC5, California Uber Alles by Dead Kennedys and Tin Soldiers by Stiff Little Fingers, to name but a few.

This set the day up nicely and the it was onto Descendents. I must admit I had no prior knowledge of this band but they are very influential with a lot of modern punk bands that I have been listening to like Blink 182, Green Day, The Offspring and The Ataris.

The two albums I have, Everything Sucks (1996) which was their fifth album and Hypercaffium Spazzinate (2016) their seventh album. Both really enjoyable albums. I haven’t had a chance to check out their other albums.

I got into Green Day post-grunge. The grunge revolution had come to a halt following the death of Kurt Cobain in 1994 and it lead to another generation of American bands coming thorough one of the being Green Day with the single Basket Case. What I didn’t know about the band was that they were around when Nirvana were still active and had even been to Belfast for a gig at Richardson Social Club in town. That would have been a great one to go to but I would get to see them in the Ulster Hall in 1998.

Dookie (1994) was their major label debut, followed by Insomniac (1995) and  Nimrod (1997).  Of those three album, Nimrod is my favourite.  During lockdown Billy Joe Armstrong took to social media and did some tunes.  One of the songs he picked was War Stories by Belfast band The Sabrejets who had minor chart success with this back in the 80s.  It is a pretty good cover and the song name checks popular British WW2 characters Captain Hurricane and Johnny Red from Battle comic and Sargent Fury from Marvel American comics.

Going back to the 1960s for The Doors.  A band that has some many best of albums, I went for the only one that I have Weird Scenes Inside the Gold Mine which was their second compilation album from 1972 and the first following the death of singer Jim Morrison.  It was reissued for the first time in over 40 years as part of Record Store Day 2014 and was subsequently issued on CD in 2014 which is the copy I have.  It’s a great compilation for anybody that is just a casual fan of their work.