This is a review of the albums that I have been listening to whilst working from home.  Albums listened to for week 18 cover from 20 July to 24 July.

Kicking off the new working week was to listen to some Primal Scream.  They would start the week and then finish it on Friday.

I got into the band just before the end of the 90s.  I was familiar with their stuff as they were always played at the student union discos and I liked what I heard but never really got round to buying any of their albums until much later.  Screamadelica (1991) was their third album and with hit singles Movin’ on Up and Loaded where mainstays at any indie or student union disco.  I never really liked dance music but this album bridged the gap between rock music and dance music for me.  My copy here is the 20th anniversary edition and I saw the band play the album in its entirety at Belsonic. 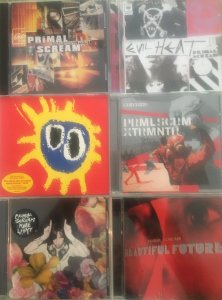 Managed to missing their fourth album and straight into album number 5, Vanishing Point (1997).  This is a really great record and it sounds like a soundtrack to a movie.  Favourite tracks on that album included Kowalski, Star and Burning Wheel.

The next album, XTRMNTR (2000) is my favourite Primal Scream album.  A more aggressive and political album and by this stage  Mani from The Stone Roses had joined the band.  The follow up, Evil Heat (2002) combined a link between the two previous albums XTRMNTR and Screamadelica.  That year would be the first time I saw them live at the first Tennent’s Vital gig at Belfast’s Botanic Gardens.  They played a blistering in a packed tent and you could feel the bass bouncing off your chest with the strobe lights going like mad.  I really enjoyed that gig.

Next up was Beautiful Future (2008) which was a mix of genre in soul, electro, rock and roll with the Scream edge.  More Light (2013) considered their most critically acclaimed album since XTRMNTR is a brilliant album with the fantastic gospel release of It’s Alright, It’s Ok at the end of the album.  That was part one, to be concluded on Friday.

Today more Scottish bands featured on the playlist.  I went for the first four Biffy Clyro albums before they went massive and also included fellow Scots, Twin Atlantic and The Twilight Sad.

Biffy Clyro are a three piece band and I first heard them when they supported Weezer in Glasgow in 2002.  My friend Colin from Glasgow described them as shite when we went to see them.  But there was something different about them and I started to take an interest going to see them at various gigs in Belfast over the next couple of years.    There first three albums are definitely a very raw sound of a young band starting off.  Compared to what they sound like now, it is still a joy to go back to the start.

Blackened Sky (2002), The Vertigo of Bliss (2003) and Infinity Land (2004) all realised in quick succession with a lot of comparisons with Nirvana but came too late for grunge as scenes had moved on since then.  But it is the next album, Puzzle (2007) which changes everything.  Their first major label release and the beginning of mainstream success.  Compared to the first three albums this is a more polished record and I like this one best.  The albums after Puzzle are a bit ok.  Currently listening to the new album which is taking a while to grow on me.  I have seen the band countless times from the small venues, to the arenas and outdoor gigs.

I came across Twin Atlantic when I heard they were supporting Biffy Clyro in Belfast in 2010.  I left it late to get tickets for the gig as Biffy Clyro were getting bigger and more popular so I had to wait until they done some of their own shows and the one I went was at the Speakeasy at Queen’s Student Union where I did two gigs in one night.  Twin Atlantic upstairs and then downstairs in Mandela for Glasvegas.  Kind of mental doing that.  Free was their second album from 2011.

The Twilight Sad are quite different to what I had been listening to earlier.  More of a post-punk/indie rock band is probably the best way to describe them.  Fourteen Autumns & Fifteen Winters (2007) was their debut album.  I have never got to see them live but have that it can be ear-splitting but this album was very melodic and I gave it a couple of listens as I haven’t heard it in a while.

Wednesday 22 July – A no title day

No rhyme or reason for this one but an opportunity to listen to some music that I haven’t played in ages.  Today it would be A Perfect Circle and The (International)Noise Conspiracy.  Two very different bands but all the more reason to mix it up a bit with three albums from each band. 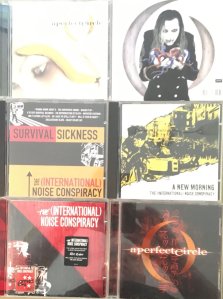 A Perfect Circle are a rock supergroup fronted by Maynard James Keenan from Tool.  They released four albums and I only have three of them – Mer de Noms (2000), Thirteenth Step (2013) and their most recent one Eat the Elephant (2018).  A very different style to Tool they sound more prog rock with a bit of alternative and hard rock.  Eat the Elephant was their fourth album and first in fourteen years.

The (International)Noise Conspiracy are a Swedish band formed after the break up of Refused.  Fused in punk and garage rock with a left-wing political stance.  The band released five albums, three of them played here include Survival Sickness (2000), A New Morning, Changing Weather (2001) and Armed Love (2005).  It was the single Smash It Up that got my attention and then I realised were the link from Refused came from.  Three really great albums, probably best to say that they were the European Rage Against The Machine.

Thursday 23 July – Another no title day

Mixing things up again I went for two bands that I really liked towards the end of the 80s and into the early 90s -King’s X and Queensryche.

Kings’s X are a combination of progressive metal, funk and soul.  Out of the Silent Planet (1988) took it’s name from a novel by CS Lewis who would be referenced frequently by the band.  I got into the band around the time of their second album, Gretchen Goes to Nebraska (1989) after seeing the video of the single Over My Head.  Faith Hope and Love (1990) was my favourite album and I got to see them support AC/DC in Belfast.  The last album I bought was their fourth album simple titled, King’s X (1992).

Queensryche were from Seattle but not a grunge band in fact quite the opposite! But I was listening to them before I got into Nirvana.  It was the release of Operation: Mindcrime (1988) as a narrative concept album about a junkie brainwashed into performing assassinations for an underground movement that was incredible album from start to finish.  In fact the band would play the whole album in its entirety.  By the time they released Empire (1990) they were at the height of their popularity.  I missed their Belfast show back then and really one of my all time regrets of never seeing the band live.  Sadly by 1994 their fortunes changed with the surge in popularity of alternative rock and grunge took over.  Looking back at both albums I have great fondness for both of them.

Finishing off the working week with more Primal Scream with five more albums.  I somehow managed to miss Riot City Blues (2006) from Monday but made up for it today.  That was their eighth album and was a more traditional return to rock and roll with Country Girl being their highest charting single.  It was listed among the ten worst Scottish albums ever in 2007.  Going to have a wee look at that and see who other nine were!

Chaosmosis (2016) was their eleventh album and last studio album.  Not pictured was a long lost album released in 2018 of the long-lost recordings made for Give Out But Don’t Give Up for the first time.  I don’t have the original album but was familiar with songs like Rocks and Jailbird.  The album gives an insight in where the band was going after Screamadelica.

Two compilation albums feature here.  The first one Dirty Hits (2003) was made up chronologically listed singles except for album tracks Long Life and Shoot Speed/Kill Light.  There is also a new version of Some Velvet Morning featuring Kate Moss on this album.

Maximum Rock’n’Roll: The Singles (2019) was released last year and the band went on the road playing all the singles in full.  This album includes their early singles like Velocity Girl which was part of the NME compilation C86. This album included the singles from the first album which were not included on Dirty Hits.