Been reading today that BBC Radio 6 Music were doing an article on the best records from 1995.

Had a look at the list and quite a few of my favourites were there.  There were some albums that didn’t quite make the cut that would be in my top 10.  Looking back on 1995 it was a pretty good year in music.

New trends were emerging and it looks like this was the golden era of the beginning of Britpop while grunge’s popularity was on the wane.   In the aftermath of Kurt Cobain’s suicide, one could argue that grunge was on the way out.  Alice in Chains would release their third album and Layne Staley’s  last with the group before his untimely death in 2002.   Soundgarden were still on the road that summer headlining Reading and I got to see them in Dublin.

But like everything else you try to find other bands to get into rather than just sticking with what you like.  So whilst still enjoying early 90s rock music I was finding new bands to listen too and 1995 was no exception.

Think I am quite happy with that lot.  Notable mention must go to the War Child album, Help which is a fantastic album. 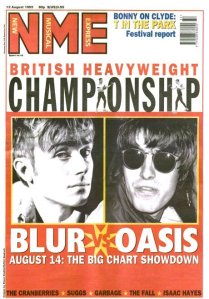 There has also been a lot of interest in the big music story from that summer this very day between Oasis and Blur.

I must admit I did side on the Oasis camp but that would change after album no.3 then I switched to Blur.  I don’t know what it was with those two bands.  I just didn’t appreciate Blur until much later and then went off Oasis.

Blur won the no.1 spot and I really hated Country House when it first came out.  I remember buying Roll With It on CD single thinking it was the better song.