This is a review of the albums that I have been listening to whilst working from home.  Albums listened to for week 13 cover from 15 June to 19 June.

Continuing on where I left off on Friday, this would have been a day off work if Sunstroke festival wasn’t cancelled.  It wasn’t the only thing cancelled, all gigs I had been due to go have all been rescheduled to next year.  Sadly two that I was looking forward to Pearl Jam and Iron Maiden didn’t get put forward to next year.

To make up for the disappointment I picked a selection of Iron Maiden live albums to recreate the feeling of seeing them live.  It’s a poor substitute for the real thing but it’s the thought that counts.  Iron Maiden release quite a lot of live albums, usually bookending of current tours.

So I started off with their most recent studio album, The Book of Souls (2015) which is a fantastic record.  Really takes you back to the Powerslave era and an album well worth the wait as Bruce Dickson was recovering from this treatment for throat cancer.  This album was so long that it came as two discs.  It definitely is one of my favourite recent albums by the band.

I caught the band live on that tour at the 3Arena in Dublin and it was a fantastic show.  The companion album, The Book of Souls: Live Chapter (2017) was recorded throughout their world tour.  Quite a lot of live cuts from the new album plus fan favourites from over the years.

I continued the theme of live albums by playing En Vivo! (2012) and Maiden England ’88 (2013) again because it crammed in a lot of live stuff that I would have got to hear that evening in Belfast.  Oh well.  Another live album, Flight 666 (2005) is like a best of album but from all around the world as the title suggests.  It was part of a documentary live film of the first leg of Somewhere Back in Time tour.

Following on from all the live albums, with such a huge back catalogue I went for two best of albums which captures the band over the years.  Somewhere Back in Time – The Best of: 1980-1989 released in 2008.  This double album contains material from their first eight album plus Live After Death.

The second best of album, From Fear to Eternity: The Best of 1990-2010 was released in 2011.  Prior to buying The Book of Souls which was the first studio album I bought since No Prayer For The Dying in 1990, I had gone off the band for a wee bit during the 1990s.

This album contained material from No Prayer For The Dying to The Final Frontier.  Strangely enough it omits material sung by Blaze Bayley and focuses more on Bruce Dickinson’s involvement.   It is a great collection.

Tuesday 16 June – Down Under

Following the metal mayhem from the day before, today’s soundtrack was all things down under.  I actually forgot one band, The D4 when I was going through my collection but somehow managed to mix them up with The Datsuns.  Strange indeed! 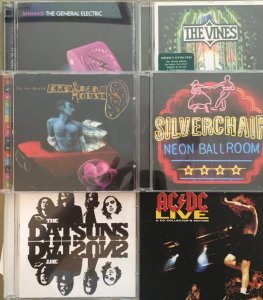 Just so the neighbours wouldn’t complain at 9am, Crowded House kicked the proceedings off with a best of album The Very Best of Crowed House (2010) is an expansion on the 1996 compilation Recurring Dream.  I must admit I didn’t like them at all in the early 90s when they released Weather With You.  That was on the radio non-stop but my wife wanted to see them once and we went to a gig in Belfast back in 2007.

Upping the tempo a bit, it was time for NME favourites The Vines and The Datsuns.  NME hailed The Vines as “the second coming of Nirvana” because of their grungy sound and their frontman, Craig Nicholls erratic on-stage behaviour.  Highly Evolved (2002) was a pretty good debut and it did tend to be part of the trend towards garage rock bands.  I caught the band live at Reading once and they were in a tent which was pretty packed out.  A bit like the Foo Fighters in 1995.   The last time I saw them in Dublin I was less impressed as it really wasn’t a great gig and they were all over the place.

The Datsuns formed in 2000 and their self-tiled debut album was released in 2002 which had them slotted in the garage rock trend created by the British music press.  Again another good debut but I only got to their second album and kind of forgot about them.  The second album was not as good as their debut.  I caught the band live a couple of times.

Another New Zealand band, Shihad came to my attention from my friend Kirsten all the way from Christchurch.  She sent me the CD, The General Electric (1999) as a present.  Not sure if they are well known this part of the world.

Another Australian band Silverchair also drew comparisons with Nirvana (they were also a three piece).  I have their first two albums so for today, I picked the last album I bought Neon Ballroom (1999).  It’s a really good album and a bit more grown up than their first two which were released when they were 14 and 16.  Quite young.  Almost like an Aussie Ash.

Last but not least, the mighty AC/DC! This live album from 1992 was recorded during the 1991 tour.   I caught the band live in Belfast in 1991 which was a fantastic gig.  I recently saw them a couple of years ago at the Aviva Stadium in Dublin but when Axl Rose took over vocal dues following the departure of Brian Johnston due to problems with his hearing I wasn’t at all keen to see the band again if they came back this way.  Anyway, this live album is great and AC/DC don’t disappoint live.

Wednesday 17 and Thursday 18 June – The Best Album In The World Ever?

Lots of music to get through of the next two days and what a collection to listen to.  The Best Album in the World Ever series was similar to Shin which I didn’t buy at the time.

I have three volumes here, volume 2 (1996), volume 4 (1996) and volume 6 (1997).  All three albums are great to listen to picking up the era of post-grunge with the arrival of Britpop.  Looking back at that time there were some cracking bands making some great music.  Sadly you don’t get the same nowadays.  God, I feel old sounding like that.

Another CD I picked up was Alterative 90s which came out in 2002.  I actually won this in my local newspaper, The Irish News.  Still has the “Promo only – Not for Sale) sticker on it.  Not too dissimilar to the other two compilations out there, this two disc collection picks up quite a lot of the alt-rock from the US to the indie UK scene it was a very good mix.

Of the two CDs here, 1993 edges it for me.  The 1996 collection is pretty good but I think the 1993 edition influenced a lot of what I was listening to back then.

The compilation album, Help (1995) was released with the proceeds going to help starving Bosnian refugees during the civil war in the Balkans.  The idea was to get the biggest bands in the UK to record exclusive songs and present them in a matter of days to get it the shops.  The CD had no track listing and that was only available as a cut out from NME.  I still have my copy of it.  It’s a brilliant album and there are some fantastic team-ups on it.  A solid 10/10 for this album.  All killer and no filler.

Ending the working week with one of my favourite bands from the turn of the millennium, Black Rebel Motorcyle Club or BRMC for short.  I remember reading about this band in the local paper’s music section and it recommended their single Whatever Happened to My Rock n Roll (Punk Sung).  It was brilliant and I bought a copy of it on CD.  The band ended up on the NME tour in 2002 and I saw them in Dublin and would get to see them numerous times over the years.

The debut BMRC (2001) is a brilliant debut and it captures a lot of influence from Sonic Youth to The Jesus and Mary Chain.  The follow up Take Them On, On Your Own (2003) is more darker and heavier sound to the first album.

I somehow managed to miss the third album Howl (2005) but got back on track in 2007 with Baby 81.  I really liked this album but I will have to get Howl and see how album 3 and 4 compare.  Could do that on Spotify but that’s no fun.  Off to HMV and see if there are any decent priced CDs to buy.

The curse of missing albums again happened with The Effects of 333 (2008) which was download only via their Myspace page.  Remember that?  The time before Facebook.  Explains why I never downloaded it!

Beat The Devil’s Tattoo (2010) and Specter at the Feast (2013) were the last two BRMC albums I had bought.  Both very different in style.  They are great live band.  Last time I saw them they supported Pearl Jam in Milton Keynes.

Check out this clip from YouTube as Mike McCready from Pearl Jam joins in performing Conscience Killer.