Twenty-eight years ago today, Nirvana came to Belfast for the first time playing the King’s Hall.  They were due to play Belfast the year before but with the success of Nevermind it didn’t look like they were going to be playing small venues again. 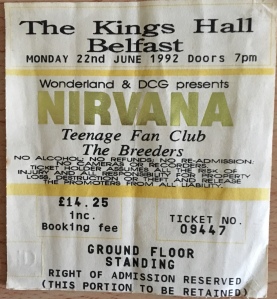 I was at the gig with my friend Paul.  I think he was just finished this GCSE exams at the time so what a gig to attend.

We were really excited for this gig.  Nevermind had changed everything for me and it was bringing other bands to my attention, like The Breeders (I would later discover Pixies after this) and Teenage Fanclub.

My recollection of the gig was that it was loud, mad and sweaty.  I was dripping from head to toe afterwards.  Possibly one of the best gigs I have been too.  I know a lot of people will go the sound in the King’s Hall was rubbish etc but when you are caught up in the moment you just go for it.

Only regrets after the gig?  Not going backstage.  Didn’t think we would have had a chance but some people did and I’ve seen signed tickets!  How I kick myself for that one.

Nirvana were due to come to Ireland again in 1994.  This time they would have been playing at the RDS which would have been a big outdoor gig.  At the time nobody wanted to go down and I didn’t want to go on my own.  Another regret.  Should have bought a ticket but would I have asked for refund following his death?  Maybe not.  That would be a good ticket to hold on too.

So where did it all start?

Nevermind was released on 24 September 1991.  It was a commercial success and knocked Michael Jackson off the top spot in America. 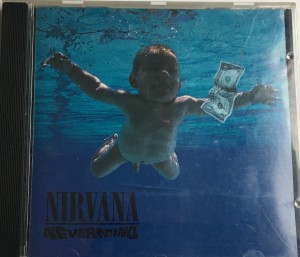 I had heard about the band but hadn’t actually listened to any of the songs prior to buying the album.  The album was bought on sheer impulse and what a great decision it was.  I was blown away by it and it opened the floodgates for the alternative rock revolution.  This was just about being at the right place and at the right time.

Nevermind produced four singles, two of them reaching the top 10 in UK – Smells Like Teen Spirit and Come as You Are.  Lithium and In Bloom both reached the top 20. 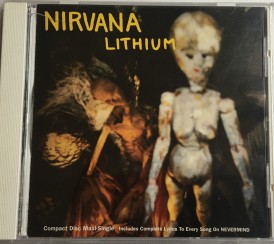 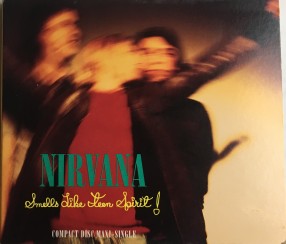 At this point I was starting to collect singles so those four would be the first Nirvana singles I owned.  Got them mainly for the B-sides.

Track listing for the singles were:

Smells Like Teen Spirt – b sides Drain You, Even in His Youth, Aneurysm

Come as You Are  – b sides Drain You (live), Endless, Nameless (extra track at end of Nevermind)

The success of Nevermind also produced other releases to cash in on the new found popularity of the band.

Hormoaning was an Australian only EP which was released in Australia and Japan during the bands tour there.  I remember seeing this in Makin’ Tracks and it was £30 for the CD which was an import at the time.  There was only 6 tracks on it and back then I couldn’t justify paying that much money for six songs.

I managed to get a copy of it on CD so it’s not a first pressing.  It got re-released in 2011 as part of Record Store Day on 12″ vinyl.  Only 6,000 numbered copies were released.  I was third in the queue at Head Records and they only had two copies of it and I got one! 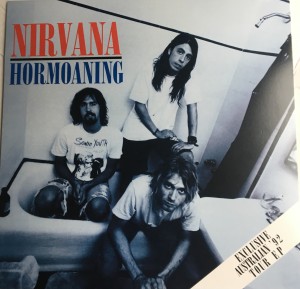 Four of the songs on Hormoaning are covers which had not been released previously. The remaining two songs are Nirvana originals which previously appeared as b-sides to singles for Nevermind.

Aneurysm and Even in His Youth,  two Nirvana original, also appear as b-sides on the Smells Like Teen Spirit single.

The other four songs are from a Peel Session, recorded for BBC Radio on October 21, 1990. Turnaround (originally by Devo), Son of a Gun and Molly’s Lips (originally by The Vaselines) appear on the Incesticide album. D-7 is a cover of the Wipers song. 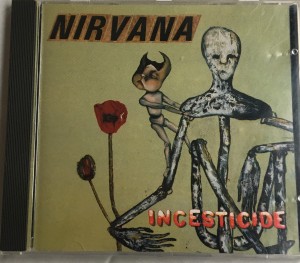 Songs such as Hairspray Queen, Aero Zeppelin and Big Long Now were unreleased at the tim are included here.

The rest of the album contained tracks from early single Sliver and Dive from The Grunge Years.

It is a really great album and it was one of my favourites after Nevermind.   I have it on both CD and vinyl.  The CD is pictured.

Now that I am getting into the band I can’t get enough of them at this stage so I have to go back to the beginning for the first album, Bleach. 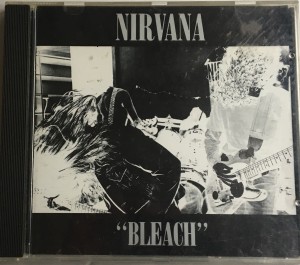 Bleach was released by Sub Pop in June 1989.  This is a much rawer Nirvana compared to the Butch Vig production on Nevermind.

My copy is a second hand one.  It would get re-released by Geffen in 1992 with two extra tracks.  My second copy is the 20th anniversary edition which includes a live performance from Pine Street Theatre in Oregon 9/2/90.

The third and final studio album, In Utero was released on September 21, 1993.  The band intended to diverge a bit from the polished production of Nevermind by bringing in Steve Albini to produce the record.  Word got out to Geffen who were not happy with it and felt it was not going to commercially viable.  Albini declined to alter the album which then lead REM producer Scott Litt to make minor changes to the albums song and remix the singles Heart Shaped Box and All Apologies.

The album was originally going to be called  I Hate Myself and I Want to Die before settling for In Utero.

The album got mixed views on it’s release.  I even remember my friends wondering what the hell was I listening to.  But their opinion on the band would soon change after this.

I have multiple copies of this. The original CD (pictured) which includes track 13 which doesn’t begin until 20 minutes, Gallons of Rubbing Alcohol Flow Through the Strip as well as the 20th anniversary deluxe edition and the 2013 remix of the album.

Two singles were released from the album, Heart Shaped Box  which featured the B-sides Marigold, Milk It and of Rubbing Alcohol Flow Through the Strip.

I never bought the second single which was a double A side of All Apologies and Rape Me.

Pennyroyal Tea was due to be the third single released from the album but the single was recalled following Kurt Cobain’s death.  It got re-released as a limited edition 7″ single for Record Store Day in 2014.

The Record Store Day release included the b-side I Hate Myself and Want to Die.

was released on 1 November 1994.  The band would play many of their lesser known songs plus covers by the Vaselines, David Bowie, Lead Belly and Meat Puppets who joined them on stage.

The original release (pictured) featured 14 songs from the MTV broadcast).  I also have a copy of it on vinyl as well.

Another post-humous release is From the Muddy Banks of the Wishkah,

released on 1 October 1996.  This album avoids all the songs previously used on the MTV Unplugged release so we get live versions of songs which have not been released before.

The 17 track album covers live cuts from all three albums.  There are some really great live tracks here.

The 1992 Reading festival was Nirvana’s final UK festival appearance.  After seeing the band live in Belfast, listening to the Radio 1 broadcast was the next best thing to experiencing them live again. 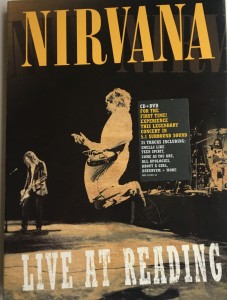 My tape copy from 1992 is still intact and it was the most listened tape prior to the commercial release of Live at Reading on 2 November 2009.  My copy is the CD/DVD box set of the entire concert.

Live at the Parmount which was released on vinyl on 5 April 2019.  I have the DVD edition of this.

The other one, Live and Loud was released on vinyl on 30 August 2019.  Again my copy is the DVD edition of this.

I also have one bootleg CD of the bands final gig in Rome from 1994.  I feel a bit bad actually owning this as you can actually hear Kurt Cobain yelling at somebody recording the gig!  This was way before everybody uses their smartphones at gigs these days.

Finally the last two items of my Nirvana collection are the best of album just called Nirvana with a black sleeve.

This compilation features the previously-unreleased You Know You’re Right.  It includes a chronological section from the three studio albums and the live MTV Unplugged album including a rare version of Been a Son and the Scott Litt remix of Pennyroyal Tea.  Definitely one for completists.

With the Lights Out

was released in November 2004 and contains three CDS and one DVD of previously rare or unreleased material including B-sides, demo, rehearsals and live recordings.

This is a very nice collection includes a 60-page booklet which contains liner notes by Thurston Moore of the American rock band Sonic Youth and journalist Neil Strauss, as well as photographs and a chronological catalogue of the band’s recording history, including studio sessions, television and radio appearances, live performances and home demo recordings sessions.