This is a review of the albums that I have been listening to whilst working from home.  Albums listened to for week 8 cover from 11May to 15 May.

Starting the week I went for a selection of artists from the American scene and international scene. 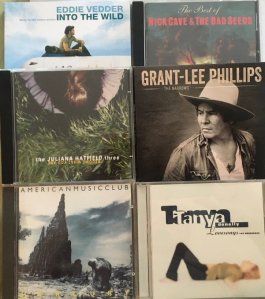 Nick Cave was supposed to have just been to Dublin (Friday 8 May) and I had a ticket for the gig.  Sadly this one was one of many gigs that I have tickets for that have either been rescheduled or cancelled.  Thankfully this is going to take place next year instead.  So making up for not getting to see him, Monday starts with The Best of Nick Cave and The Bad Seeds (1998) 16 tracks covering  his early career to the most recent output at the time of release.

Grant-Lee Phillips was in band called Grant Lee Buffalo.  I played one of their albums earlier in the lockdown but like a lot of things I kind of forgot all about them when they disbanded in 1999.  I wasn’t up to speed on his solo works, so I picked up The Narrows (2016).  Think I shall investigate some of this other solo works.

American Music Club lead by Mark Eitzel released Mercury in 1993.  I picked this one out as it was another one of those forgotten about CDs from the time.  I recently listened to the Aids benefit CD No Alternative (1993) and one of their tracks was on it.

Juliana Hatfield was in Blake Babies, Some Girls and also The Lemonheads.  I got into her solo music around the same time as listening to The Lemonheads.  I picked her second album, Become What You Are (1993) to listen to.  Will definitely be revisiting some of her other albums during lockdown.

Tanya was lead vocalist and songwriter for Belly and Feed The Tree was a bit hit.  She has recorded five albums and I went for the first one, Lovesongs for Underdogs (1997).

Another casualty of gigs being cancelled were Pearl Jam.  I have seen Eddie Vedder live twice and he puts on a great show solo as well as Pearl Jam!  Eddie has only released two albums as solo artist.  I played Into The Wild (2007) which was his debut solo album and soundtrack for the film of the same name.  Songs like Setting Forth, Hard Sun, Society and Guaranteed are all live favourites from his solo shows.

Today’s theme was 2002 following Tim’s Twitter Listening Party,that didn’t happened the previous night with Texas band And You Will Know Us by the Trail of Dead.   I will shorten this to Trail of Dead to make it easier reading. 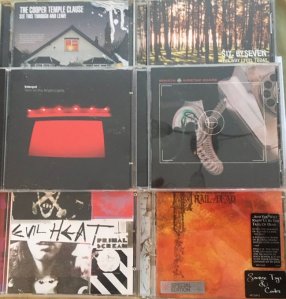 A technical hitch meant the live tweeting never happened as everybody tuned in listening to Source Tags and Codes.  I decided to give it another spin the next day.  And that lead me to creating a 2002 theme of the best albums released that year.  A fantastic live act.  One memory I have of them is seeing them in the Astoria in London and a gig ending with chaotic scenes as the band gave away their equipment.  Not often do you see anybody coming out of a gig with bits and pieces of a drum kit!

After listening to Trail of Dead, I selected some albums by Interpol, Sparta, Six By Seven, The Cooper Temple Clause and Primal Scream.

Interpol’s Turn on the Bright Lights was one of my favourite albums that year.  The first thing that came into my mind was how influenced they were by Joy Division.   They played Belfast in the Limelight (the tiny one) supported by the then unknown Franz Ferdinand.

Sparta arose from the ashes of At The Drive In.  Their debut album Wiretap Scars was on the playlist that day.

I got into Six By Seven in 2000, so it was going to be their second album, The Way I Feel Today.

Next up was The Cooper Temple Clause.  Their debut album, See This Through And Leave was brilliant.  Some brilliant songs on that album.

Primal Scream need  no introduction.   This was their seventh album which makes a link between the bands two other albums XTRMNTR (2000) and Screamadelica (1991).  A really great album and one of my favourites.

Continuing the theme of 2002 some other favourite albums from that year came from Pearl Jam, Bruce Springsteen, Idlewild, Sonic Youth, Black Rebel Motorcycle Club (BRMC) and The Polyphonic Spree.

Both Pearl Jam and Bruce release albums in the aftermath of the 9/11 attacks in America.  Riot Act was Pearl Jam’s seventh album was heavily influenced by 9/11 and also the tragedy at Roskilde Festival in 2000 where nine fans died at a crush during their performance.

The Rising was Bruce’s twelfth album.  It was also his first with The E Street Band in 18 years.  The album was part of his reflections on the aftermath of 9/11.  The last track on the album, My City of Ruins is quite haunting.

Idlewild released The Remote Part which was one of my favourites of theirs.  It was a more melodic album than the previous one, 100 Broken Windows.  I think they were considered the Scottish REM at this point.

Sonic Youth albums are so different with every release and Murray Street was no exception.  I got into them time Dirty (1992) came out and that was down to the Nirvana influence.  Only ever got to see them live once and my ears were ringing for days!

Next up is the craziest band I have ever had the pleasure of seeing live! The Polyphonic Spree!  If you ever wanted to join a cult, this would be the one to join.  The Beginning Stages of…is a very different album.  Each song is broke up into sections, so all the songs roll into each other but it is fantastic listening experience.

Concluding 2002 was Black Rebel Motorcycle Club, will reference the band in shorter version BRMC.  I don’t know why I have this down as 2002.  Wikipedia says 2001.  Must have got the dates mixed up but I think this album fits in well here.  I caught them on the NME tour in Dublin and really liked them.  Just as Interpol were influenced by Joy Division you could tell that BRMC were influenced by The Jesus and Mary Chain.  A great band, I hope to play more of their albums soon.

At last Pixies get a day all to themselves.  It was inevitable that I would get round to listening to them.  The band I got into at the wrong time.  They split up when I got introduced to them but it was thanks to one of my work colleagues who leant me Doolittle (1989) and Bossanova (1990) that I was blown away.  Also unknown at the time I got into them they played at the Ulster Hall.  Didn’t get to see them play on that occasion but made up for it last year.

So along with those two influential albums and indeed two of my all time favourites, I got playing loads that day.  On the pictures shown, there is a box set Death to the Pixies (1997) which collects their best tracks from all four albums as well as a live CD.

Surfer Rosa and Come on Pilgrim (1988) are in re-released box set here.  I only got this last year.  Complete ‘B’ Sides (2001) featuring b sides from six out of eight of their UK singles from the 1980s and 1990s and one US single.  One of my favourites on this is their cover of Neil Young’s Winterlong.

Beneath the Eyrie (2019) is their most recent release and their third album since reforming.  I was looking forward to getting to see them again this year supporting Pearl Jam in London and their own gig in Dublin.  Sadly going to have to wait until 2021.

In the red corner we have two politically charged bands, Rage Against the Machine and Refused. 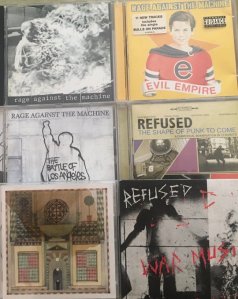 Three albums each from each band.  Rage formed in 1991 and their music expresses revolutionary political views.  Their eponymous debut album (1992) came out in right place at the right time.  I don’t know how I managed to play that at home when I was living with my mum and dad!  They must have heard the swearing on Killing In the Name.  So infamous, Radio 1 played the original unedited single with “F**k” going over the airwaves 17 times!

Evil Empire (1996) was the follow up to it and The Battle of Los Angeles (1999) was on next.  A great band live full of energy.  They released one more album, Renegades (2000) which I will write about on another blog. I was lucky to see them in Belfast in 1993.  Last time I saw them was in 2000 at the Reading festival.  They reformed this year but the whole Covid-19 situation has meant all tours are cancelled, including Rage’s return to Ireland in September at Electric Picnic.  Hopefully there will be some shows next year.

Refused are a Swedish hardcore punk band.  I started to take interest in them when I heard one of their songs, New Noise which was from the album The Shape of Punk To Come (1998).  I liked it so much that I bought the album and it is an amazing piece of work.  Inbetween songs there are political interludes which makes this a wee bit different from Rage.  Here we have samples were on Rage’s albums it was always credited as sound by guitar, base and drums.  Refused use technological sounds and also jazz.

What I didn’t know at the time was that they broke up after this.  The lead singer Dennis Lyxzen when onto to form The (International) Noise Conspiracy. But like everything else bands do get back together again and Freedom (2015) was their first album since 1998’s The Shape of Punk To Come.  I really enjoyed the new album and I even managed to get to see them live.  They played Glasgow one year and it was my birthday and I just had to go over and see them live.  They did not disappoint.  I was hoping to see them at Sunstroke festival this time next week but sadly that has been cancelled.  I do hope they make a return visit to these shores sometime next year.

War Music (2019) is their most recent album.  It is an album that fits in with the time we are living in at the moment.  With so much upheaval going on in the world at the moment, it is music by both Rage and Refused that feel right for the times.