This is a review of the albums that I have been listening to whilst working from home.  Albums listened to for week 7 cover from 4 May to 7 May.

One of the things that I have loved embracing about music during lockdown was going onto Twitter and following Tim’s Twitter Listening Party.  Tim being Tim Burgess, lead singer of The Charlatans.

His listening parties are great.  A simple idea, follow the artist online and watch online commentary whilst either listening to the album on vinyl, CD or stream it even.

Two groups here have had a mention on Twitter, Sleeper and Mansun.  Two bands I got into in the 90s.

Sleeper released three albums in the 90s before breaking up but got back together again for a fourth album, The Modern Age (2019).  I did play that but not in the photo.

The three albums listed were Smart (1995), The It Girl (1996) and Pleased To Meet You (1997).  Sadly a band I never got to see live but prior to the pandemic they were doing a reunion tour.  Dates have been put back to next year so hopefully a future Irish date may be on the cards.

Mansun came onto the scene towards the end of the 90s.  Take It Easy Chicken was the first song I heard on Steve Lamacq’s Evening Session.  Played here were the three Mansun albums that I own – Attack of the Grey Lantern (1997), Six (1998) and Little Kix (2000).  Another band I never got to see live.

Tuesday 5 May – Punk and Ska 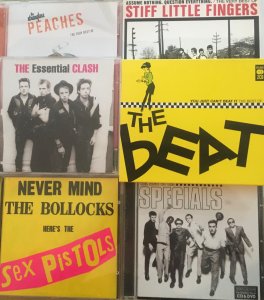 Picked this theme for today following the passing of The Stranglers keyboardist, Dave Greenfield.  Had been fortunate to see the band few times, twice as support to Simple Minds and Stiff Little Fingers and one of their own headline shows.

So going through my collection I picked out four best of albums and one single album.  Quite a lot to cover here.

The Strangler’s have had loads of compilation albums.  The one that I have is Peaches: They Very Best of The Stranglers  (2002).  This 20 track CD included some of the well known songs like No More Heroes, Golden Brown, Walk On By and Always The Sun.

Stiff Little Fingers are punk legends from Northern Ireland.  Formed at the height of the Troubles in Belfast.  I was too young to like them at the time but as I got older I started to appreciate them and have seen them loads of times.  For the last three years, they have been headlining their own shows at Belfast’s Custom House Square in the summer and always bringing an array of talent with them.  The Strangler’s being one of their guests.

I have a box set of all the Stiff Little Fingers albums but this compilation Assume Nothing, Question Everything: Very Best of Stiff Little Fingers (2012) is a fantastic collection of songs.  Two discs covering their career from their debut, Inflammable Material (1979) to Guitar and Drum (2003).

Kicking off for Ska next was The Beat.  Can be a bit confusing as there are two versions of the band –  The English Beat staring Dave Wakeling and The Beat featuring Ranking Roger.  The latter I have seen supporting Stiff Little Fingers.  To be honest, Mirror in the Bathroom is the only song I was probably familiar with, so this album, You Just Can’t Beat it: The Best of the Beat (2008) covers the best of their career.  Didn’t know the English Beat also had a best of.  Might be one to checkout.

Taking a break from the best of collections, it was time for Sex Pistols!  There is only one album you need and it’s Never Mind the Bollocks (1977).  Again too young at the time to like punk but when you get older you definitely do appreciate it.  A timeless album.

The Best of the Specials (2008) features 20 of their songs.  Great music and very relevant for today.  Speaking of relevant, you don’t get more relevant than The Clash.  They have that many collections and I have quite a few, so The Essential Clash (2003) covered all the songs from their career from their debut album in 1977 to their last album in 1985.  The one band I would love to see if time travel existed!

It finally had to happen.  The Britpop wars!  Where do I start here?  First of all I definitely got into Oasis first before Blur but something happened along the way and then I switched sides.  You are allowed to do that, right?

Anyway, I am sure there will be people who were for either camp or indeed did like both bands.  For me it was Oasis first.  When asked by my friend Eddie did I want to go to the Limelight to see this band Oasis.  My reply was who were they?  Needless to say we didn’t go and the rest is history.  If you were one of the lucky ones to see them in tiniest venue in Belfast I salute you.  I still kick myself of that.  Definitely Maybe (1994) went to no.1 during that gig.  Nice bit of history that for those that were there!

I did get to see Oasis the following year though supporting REM at Slane Castle in 1995.  They were at the height of their popularity and (What’s the Story) Morning Glory? (1995) was released later that autumn.

Sadly for me by 1997 it was all over for them as far as I was concerned.  I did have Be Here Now (1997) but no longer have it.  That was the album that turned me off them and I must admit I have never followed either Noel or Liam’s solo careers.

So what now?  By a twist of fate I suddenly find myself liking Blur!  Funny enough it was 1997 that changed it for me.  Song 2 was kind of song you would dance like mad to at your local indie disco but I think it was actually their headline slot the year later that I definitely appreciated them better.  Late to the party, three Blur albums that I have enjoyed are here.  Blur (1997) the one that changed it for me.  The other two are compilation albums, Blur: The Best Of (2000) was my first chance to see them doing the Singles Night Tour.  The live album, Live at the Budokan (1996) captures the band live in Japan at the height of their popularity during the Britpop years.  It is a great album.

Closing the working week it is time to listen to some ladies who rock.  Looking at my collection nearly most of the music I am into tends to be male dominated but there are some female groups out there that I like.

Today I picked two American bands that I love – Sleater Kinney and Vercua Salt.  Quite a few albums to go through by these two bands.  I picked three Sleater Kinney albums and three Veruca Salt albums.  One of the I only had on vinyl so I ended up streaming it on Spotify.  Evil! But when this lockdown is over I am going to hunt down a CD copy.

I got into Sleater Kinney for All Hands on the Bad One (2000).   By that stage they had released four albums.  Dig Me Out (1997) was played also with No Cities to Love (2015).  I got to catch the band on that tour when they played Vicar Street in Dublin.

For Vercua Salt I was listening to them a the tail end of grunge.  First single I bought, Number One Blind was from American Thighs (1994).  Can’t remember why I never bought the album but I managed to get it on vinyl when it was reissued.  So for the purposes of listening to music that day Spotify had to fill in the missing CD slot!  First Veruca Salt album I bought proper was Eight Arms To Hold You (1997).  Ghost Notes (2015) was their last release.  A really great band.  Just wish I had seen them live.

One thought on “Music life in lockdown week 7”