Back for another instalment of what I have been listening to during the Covid-19 lockdown.  Working from home has given me the freedom to raid my CD collection and to date I have been enjoying browsing through my collection, picking stuff out that I haven’t listened to in ages and creating some themes.

This is a shorter week as I am now back in the ‘office’ after the long Easter weekend break.  So what music joys were to be heard that particular week?

I have decided to mix things up a bit for this week, so kicking off the themes for the week is all about Scandinavia!  Some great bands here mostly from Denmark, Norway and Sweden.  No Abba! Sorry. 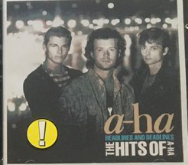 Ok no disclaimer for this one but this is a guilty pleasure, a-ha!  I really liked them when I was in secondary school.  Remember getting all the singles.  Still have them, so kicking off the Scandinavian theme is a-ha with a greatest hits album.  It is definitely enjoyable to listen to this again.  Brings back images of what I was liking when I was 15-16 years old at the time.

Next up is The Wannadies from Sweden.  I got into them around 1997 when they released the album Bagsy Me.  You and Me Song was a big hit at the time for the Romeo and Juliet soundtrack which I liked and lead to this album.

The song has also been used in other tv like Coronation Street on ITV and BBC3 tv series I’m With Stupid.

Still sticking to the subject of Swedish bands, next up is The Cardigans.  I picked two of their albums to listen to, First Band on the Moon and Grand Turismo. 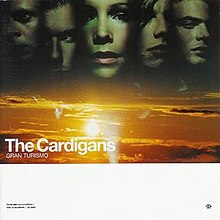 Again the Romeo and Juliet soundtrack introduces me to them.  Lovefool was on that soundtrack.  First Band on the Moon is a great album and includes a really fantastic cover of Black Sabbath’s Iron Man.

The next album Grand Turismo is also a great album as well.  I got to see the band play in Belfast supporting Catatonia around that time.

Lots of hype with the next two bands, Sweden’s The Hives and Denmark’s The Raveonettes.

The Hives rose to prominence is the early 2000s, championed by NME during the garage rock revival.

The album featured here is a compilation album, Your New Favourite Band.  Dressed in black and white uniforms, they were fantastic live.  Quite like a Swedish version of The Ramones.

The Raveonettes were a two piece who released their debut EP, Whip It on in 2002.  It came with the single Attack of the Ghost Riders which MTV banned due to a very similar looking character in the video to Johnny Blaze from Marvel Comics Ghost Rider series.

Still on themes, next day is totally devoted to all things Derry.  Could have called this Derry Boys but that doesn’t sound right.  When you think of music from Derry, you automatically thing of The Undertones. 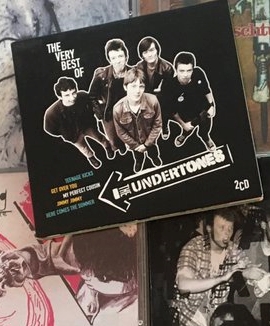 But amongst the playlist today is lots of great bands from the 1990s and early 2000s who sadly didn’t quite get the commercial success they should have.

Scheer and Schtum were around at the time when grunge was taking off .  Cuckooo were early 90s as well but from their ashes came Jet Plane Landing.  Fighting With Wire also emerged from Jet Plane Landing as well.  Both bands were firm favourites of mine and were great live.

The Wood Burning Savages have been the most recent Derry band I have been listening to.  Their debut album, Stability was one of my favourite albums a couple of years ago.  They remind me of Manic Street Preachers Generation Terrorists era.

The Undertones need no introduction.  They are well and truly Derry legends.    The album featured here is a best of album and there are no duds on it.  Fergal Sharkey left  and went solo.  I remember his solo stuff and I never liked it.  Was too young at the time to appreciate them but as I got older and listened to their music enjoyed it.  Seen them a few times with the new singer Paul McLoone.

A band that won the heart of John Peel.  So good he played Teenage Kicks twice on his radio show.

Ending the working week with a collection of American alt-rock.  All of the CDs here apart from No Alternative all came from Mojo magazine. 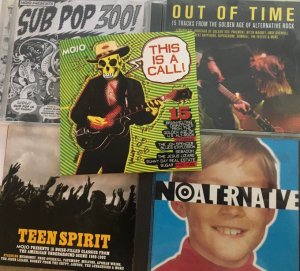 First CD was a collection of bands that appeared on the famous Sub Pop label that Nirvana had signed too.  However on this CD, Sub Pop 300 which is a nod to the first Sub Pop compilation release, Sub Pop 100.  This CD featured bands like Afghan Whigs, L7, Mudhoney, Screaming Trees, Green River and Tad, as well as new bands like The Shins and The Postal Service.

The next CD is Teen Spirit.  Again another nod to Nirvana and funny enough they don’t have any songs on this CD either!  But that is not a bad thing as well as favourites like Mudhoney and Afghan Whigs, it also included The Jesus Lizard, Urge Overkill, Pavement, Melvins and Jawbox to name but a few.

The next CD from Mojo magazine is Out of Time.   Nice REM reference there but no REM tracks on the album.  Think this is quite clever as all those CDS that I got with the magazine, the focus wasn’t quite on the breakthroughs of both Nirvana and REM but focus on all the other bands of that era.

This collection is quite good with tracks from Superchunk, Dinosaur Jr, Pavement, Lemonheads to name but a few.

Final CD from Mojo is This Is a Call.  Another nod to another American band, Foo Fighters but none of their tracks are on the CD.  Some great bands on this one like Sugar, Sebadoh,  Madder Rose, Built to Spill, Sunny Day Real Estate and Jon Spencer Blues Explosion.

But best of the bunch is leaving the best CD until the last.  No Alternative is one of the best compilation albums I have ever bought.  It was released in 1993 to benefit Aids relief.  The album includes originals and cover versions from bands who went on to define the alternative rock scene of the 1990s.

A fine album to end the working week.  So good I even played it twice!