So on to week 3 of working from home (WFH) and I had just recently went through my CDs and reorganised the collection.  Looking at them now in order and a bit neater makes it a bit easy for browsing the shelves.  I am old-fashioned I know.

Monday starts with a tribute to both Kurt Cobain and Layne Staley who both died on 5 April.  Kurt died in 1994 and Layne in 2002.  Both were in grunge bands that I loved, Nirvana and Alice in Chains.  Two different bands and two very different styles but I loved both of them. 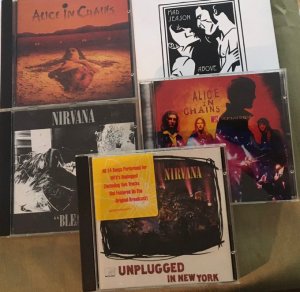 Looking through my collection I picked two Alice in Chains albums (Dirt and Unlplugged), two Nirvana albums (Bleach and Unplugged) plus Mad Season which was a side project of other members of the Seattle scene – Alice in Chains, Screaming Trees and Pearl Jam.

All great albums, in fact both Unplugged albums are great.  I am a fan of Pearl Jam too but these two are easily no.1 and 2 in the Unplugged series.

As I was listening away I was browsing through Twitter and I seen a tweet from one of the DJs on Radio Ulster, Steven Rainey who hosts the early morning show on the programme asking for requests.  So I fired off a tweet requesting Nirvana and Alice in Chains dedicated to both Kurt and Layne.  I stopped listening to the CD player and tuned into the radio.  I got the shout out for both of them and Steven played About A Girl by Nirvana.  I was blown away by this as I hadn’t requested a particular song, just hoping he’d play anything by the band.  He did mention me in a reply that he would play Alice in Chains next time.  Sweet.

Quite pleased with that I looked to the next day to see what the theme would be.  Again the beauty of looking at your collection is a bit like browsing through records in a shop is that you look through the racks to see if something stands out.  Since I reorganised the CDs, two stuck out straight way – Kyuss and Probot.  Theme here is front men.  Josh Homme from Queens of the Stone Age was in Kyuss and Dave Grohl’s Probot was a collection of songs written by him by performed by metal legends like Lemmy, King Diamond, Max Cavalera, to name a few.

The albums selected for playing on Tuesday was Kyuss’s Welcome To Sky Valley, two from Queens of the Stone Age (Rated R and Songs for the Deaf which also features Dave Grohl on drums) and of course Probot which was self titled.  Quite a heavy rotation for a Tuesday morning.

Both Queens of the Stone Age albums are big favourites of mine.  The Probot side project was great to and was a bit different from Foo Fighters.  I don’t think I appreciated Kyuss as much so might need to go back to that one.  Bought the CD because Josh Homme was in the band.

It is now middle of the week and Easter holidays are fast approaching even in lockdown.  Wednesday I decided to dedicate it to Ash, renaming it Ash Wednesday.  Actually I’ve nicked that idea of them as they posted something like that back when Lent was starting.

Hard to believe I have been following this band for 25 years.  For Wednesday I picked the best of the bunch, the Trailer mini LP, the debut 1977, it’s follow up Nu-Clear Sounds and their third album Free All Angels.  Chucked in the new 25 year retrospective CD Teenage Wildlife which was signed by Tim Wheeler who I met back in February at an instore performance and signing at HMV.

Getting the grips of picking themes for this week, so Thursday’s selected is all dedicated to REM for no apparent reason other than I wanted to listen to them. 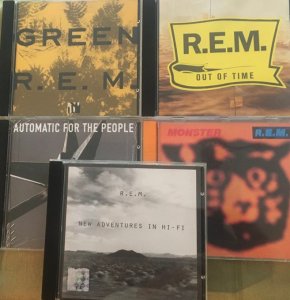 My introduction to REM was quite late.  I had by passed their early releases especially their big releases from the 90s Out of Time and Automatic for the People.  I think looking back it was Shiny Happy People that put me off them and for some reason Automatic for the People didn’t quite grab me at the time.  Although I liked the lead track Drive, it wasn’t enough to convince me.

However, that all changed then they released Monster in 1994 and then I started to pay attention.  I really liked the album and then started to have an appreciation of their back catalogue.  Included are the albums I didn’t like first time round, Out of Time and Automatic for the People along with their major label debut, Green.

But stand out album of them all is New Adventures in Hi-Fi.  That is my favourite REM album and it is just brilliant.  By that stage I got my first taste of them live, seeing them at Slane Castle in 1995.  All of the songs on New Adventures were written on the road during the Monster tour.

Week 3 is coming to a close as it is now Good Friday and a long weekend of no work for the Easter break.  I didn’t really plan this one very well so it was a bit random but when I picked out these CDs a small pattern was emerging.

I decided to mix it up a bit with some punk.  I had a few compilation albums that I picked up free on music magazines, two of them from Kerrang magazine which featured a good bunch of metal and punk bands.  Both CDs would open the doors for other bands to get into which is good.

My interest in the Ramones began with another band Husker Du who used to do a live version of Sheena is a Punk Rocker.  That lead me to the only Ramones CD that I own, Anthology which features a career spanning retrospective from their early days right up to the last album.  A total of 57 tracks which in my book was pretty good valve for money.  The other CD came from Mojo magazine which looked back at the roots of the band.  It was a good one to listen to.

One thought on “Music life in lockdown week 3”