Since lockdown began last month I have been struggling to be a bit creative with my blog and I must admit I haven’t done much since my last post back in February.

I have been trying to get motivated to write again and so far the year 2020 is going to turn out to be the worst year for gigs ever.  To date all gigs attended this year were in January and February before the COVID-19 situation got worst.  Still have to write the blog for 2008.  I am determined to get this back on track but for now it’s all about music in the lockdown.

So far gigs that I was hoping to go to have been rescheduled – Nick Cave, Pearl Jam.  Gigs cancelled – Sunstroke Festival.  Holding by breath waiting to be either cancelled or rescheduled – Rammestein and Iron Maiden.

Health is more important than ever and music plays a big part in my mental health so whilst working from home I tried to adjust to the strange sound of hearing nothing.  I don’t use Spotify or any of the streaming sites but I have a big collection of CDs so I got away from the desk at my home office and starting hoking through my CDs to see what I wanted to listen to.

I started working from home on 20 March.  Two days before my birthday.  Haven’t experienced a lockdown birthday before.  So while I was getting ready to do some work, I wanted to listen to some music.  Thought I could use the laptop but the sound wasn’t great.  Without further ado, I brought in the CD unit into the dining room and thought what I am going to listen to?

All this was totally random.  Some CDs not in the respective slots and some CDs pulled out at random. 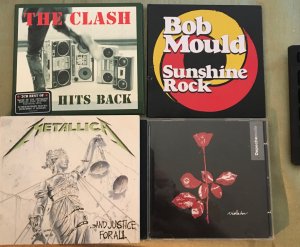 No rhyme or reason to this selection, they were about so that’s what I was going to listen to.  The Clash, Bob Mould, Metallica and Depeche Mode.  Quite a diverse mix there.

The Clash album was yet another “best off” but I quite liked this one with the track listing.

Bob Mould’s album Sunshine Rock was a favourite of mine.  Will definitely be playing more of his stuff.

The Metallica CD hadn’t been filed under M yet so that would do.  And Justice For All was my introduction to Metallica and have been a fan since.  So far it’s the only one that has been played twice.

Finally rounding it off was Depeche Mode’s Violator which was one of the best albums of the 90s.  Enjoy The Silence was the perfect track for my new found isolation.

Looking back on the first working day at home I found that listening to music helped me.  It gave the working day a new purpose.  I still had work to do but I could to with my own soundtrack which was great.

So each day was marked with a Twitter feed with photos of albums and because you can’t really say too much on Twitter I thought maybe the pictures will do the talking.  But I am trying to be a bit creative so this blog is going to have a new purpose and will do a week by week account of my listening tastes.

Maybe there is an album in there that you haven’t heard in a while and you might want to play it on LP, CD or even stream it if that’s what you like doing.

New life has breathed into this blog.