The new year starts off with the very first Kerrang tour to come to Belfast.  This was their version of the NME tour where the metal magazine selects four bands on a bill for their tips of the year.

Headlining this gig at Mandela Hall was Biffy Clyro who were just six months away from releasing their breakthrough album, Puzzle.  Support came from The Bronx, The Audition and I Am Ghost.

I took Gillian’s cousin to the gig but we made it down in time for The Bronx and Biffy Clyro, missing the other two bands.  Biffy Clyro were incredible live.  To think you were witnessing them in a smaller setting compared to the big arenas that they are currently playing in.  We will catch up with them later on this as they will making a return visit to the same venue later on in the year.

In February, we had a trip over to Glasgow courtesy of my friend Colin who lives there.  He bought myself and Gillian a nights stay in a hotel in Glasgow for our wedding and we headed over to see The Killers at the SECC Arena (now the Hydro).  Colin came along to the gig as well.

The Killers had just released Sam’s Town for their second album after the success of Hot Fuss.  Support came from Black Rebel Motorcyle club who also had a new album out, Baby 81.  I guess I was more excited about BRMC than the Killers at the time as I never really took to the second album like I did for the first album.

It was a decent enough performance by The Killers but after the gig I would find myself going off them which would result in seeing them for one last time later on in the summer.

There were no gig in March to go to, so next up was  James at the  Olympia Theatre in Dublin in April.

This was my second time seeing James in this iconic venue.  Quite possibly my favourite venue in Dublin.  The band reformed in 2007 and were getting ready to release a new album which would be coming out the following year.

James are a great live band with Tim Booth as a very energetic and lively front man with his mad dancing on stage.  This was a great gig.   Not sure about the ticket stub though!  We got a lovely print at home one.  Doesn’t have the same quality!

Next gig was the return of the Lemonheads to Belfast in May which was the last Irish stop of the tour having played at Cork, Galway and Dublin.

Lemonheads gigs tend to be a mixture of being great and being chaotic.

Probably depending on what mood Evan Dando is in! Thankfully this gig at the Mandela Hall was the latter!

The band were in fine form giving us a blast of 90s nostalgia. 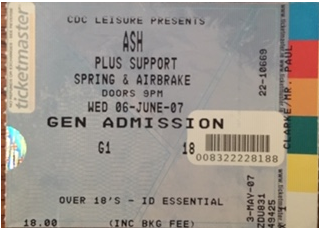 This time the band were back to a three piece following the departure of guitarist Charlotte Hatherley.  Definitely much missed.  Ash released their fifth album, Twilight of the Innocents that year.  Must admit I think this is their weakest album but they always cut it live.

They would be back again in Belfast later on in the year.

A few weeks later I was over in London to see the White Stripes for what ended up as a free ticket!  Gillian won two tickets courtesy of O2 and asked me who I would like to see.  The White Stripes were headlining Hyde Park as part of the O2 Wireless festival so I opted for that.

She didn’t go to the gig with me so I went over to London and stayed with my friend David who took the other ticket.  Hyde Park is a huge place.  This was the first gig I had ever been to at the venue.

The White Stripes had just released a new album, Icky Thump and were promoting it.  It was a full support bill.   Main support was Queens of the Stone Age which I was pleased to get to see them again.  Trying to remember the other bands that were on the bill but not remembering too much as I think we just about got there in time for Queens of the Stone Age.

Queens of the Stone Age were excellent as always.  The White Stripes were great too.  I think this may have been the last time I would get to see them.

Summer back home was much quieter gig wise.  I was no longer heading down for Oxegen so the next big gig was Tennent’s Vital which came to Belfast’s Ormeau Park for two days in August.  It was a case of picking which one to go to as none of my friends were going to do both.  Day 1 was headlined by Razorlight with support from Manic Street Preachers.

That would have been my choice but then I didn’t like Razorlight so left it would have been a waste of money so we ended up with The Killers on day 2.   Apart from Mark Ronson, the rest of the support bill was quite good – Kasabian (before they went rubbish), The Shins and Albert Hammond jr from the Strokes.

However as far as gigs go it was aright.  The sound wasn’t the best and it ended up as the last ever Killers gig I would go to.

Next up was Idlewild.  After a two month break of not seeing anybody this was a welcome return to the live scene.

Idlewild are one of my favourite bands and they never disappoint.   This gig at Mandela Hall was celebrating the bands 10th birthday as they released as best of collection ‘Scottish Fiction’.  I don’t think I have ever been a bad Idlewild gig.

Sometimes you get gigs that you go to and wonder WTF!  Well, this next one definitely sums it up!

My friend Paddy picked a gig to go to at the Spring and Airbrake.  You Say Party! We Say Die! was definitely getting filed under WTF as to be honest I have no idea what we were thinking of going to this one!

My wife seemed to have the knack of wining tickets for gigs.  This never really happens to me as I haven’t won a concert ticket since that Big Country gig back in 1991!

Anyway, I am not complaining as this being the third ticket she has one.  This time for Crowded House at the Waterfront. 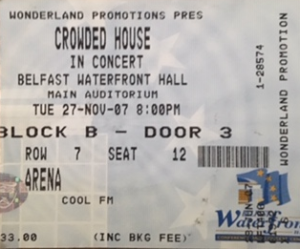 Now I must admit I was never a big fan.  I think that song back in the early 90s about the weather did my head in that I was instantly turned off them, as everywhere you went (no pun intended!) they were always on the radio with that song!

However, I was willing to give it a chance even for a seated gig and I will admit I was pleasantly surprised that I actually did enjoy this gig.  Sometimes you have to go beyond the song that you despise. 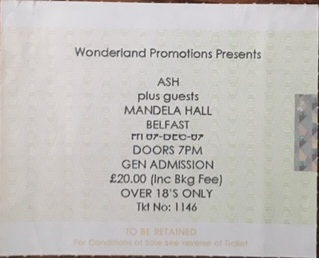 For the encore of the year the band were joined on stage by friends Barry Peak, frontman of school friends and mentors Laser Gun Nun (more recently Backwater) for a cover of their anthem, and Cosmic Debri, ‘Melon Farmer’. Then ending the night with Nathan Connelly from Snow Patrol on guitar for ‘Goldfinger’ and ‘Burn Baby Burn’.  Mark also teased the crowd almost providing ‘Goldfinger’ backing vocals.

Following this was a return visit to Belfast by Black Rebel  Motorcycle Club who had released the really excellent Baby 81 album. 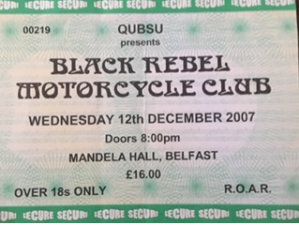 Having seen them support The Killers in Glasgow earlier in the year it as great to see the band showcase their new material that night.

A great gig by a great band.

Last gig of the year was going to be Biffy Clyro.

They were the first band I would see at the start of the year and it was kind of appropriate that they would be the band that would close 2007.

From that moment in January the wheels were in motion that this would be Biffy’s year and it certainly was.

Puzzle was released in the summer and it would become their breakthrough album.  The kind of album that would divide fans into old and new.

A bit like the Manic Street Preachers in a way.  While the new stuff is definitely more radio friendly, it is in no comparison to the edgy sound of the first three albums.

But no matter what you think of old Biffy vs new Biffy you couldn’t deny that they are great live.  This might be the last chance to get to see them in a small setting and they didn’t disappoint.