Teenage Fanclub released their first album in nearly five years with the release of Man Made.  They brought the tour to Belfast and played in the iconic Mandela Hall at Queen’s University. 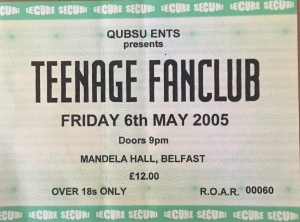 Teenage Fanclub are fantastic live and are one of my favourite bands.  They never disappoint live.  I always make a point of going to see them any time they come to Belfast.

The next gig was a trip down to Dublin to see Weezer.  A band that I fell in love with in 1994 this was their first visit to Ireland.  I was getting to see them for the first time and was so excited.

Weezer were on tour promoting their new album, Make Believe and the gig at Dublin’s Vicar Street sold out very quickly.  I was very lucky to get tickets for both myself and Gillian and we made the trip down to Dublin for what was a very memorable gig.

They played a lot of new material that night but we were treated to some classics from the Blue Album and Pinkerton.  Vicar Street was the best venue to see them.  They would make a quick return visit to Dublin a couple of months later playing the much bigger Point Theatre.  Sadly I didn’t make the return visit as we had just got engaged the previous month and focus would turn to wedding planning following our engagement the previous month.

Funeral For a Friend played Mandela Hall on 23 June and had just released their second album, Hours.  This was the first time I got to see them.

They were one of the first bands that I started experimented downloading music to and then burning onto CD.  That sounds very old school in the Napster era but what I did was that the download was the key to whether I would like the group and would lead me to buy the physical copy.  I am very old school and still bought CDs when everyone was really getting into downloading via Napster, etc.

Next day it was time for the biggest gig of the year.  U2 were coming to Dublin!  I went down to Virgin Megastore (sadly no longer in Belfast) for the midnight opening ahead of the release of How To Dismantle an Atomic Bomb.

Soon enough the tour was announced as the Vertigo tour and the band would be playing three nights at Croke Park.  While this wasn’t my first visit to Croke Park.  I had previously been down for All-Ireland finals with my dad.  This time it was going to be a major first to see a gig there.  I was too young at the time when they played there in 1985 during The Unforgettable Fire tour and same again in 1987 during The Joshua Tree tour. 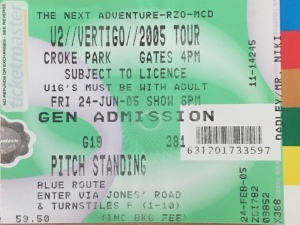 Both myself and my work colleague Niki joined the fan club to ensure we got tickets.  Think you were entitled to at least four tickets.  Niki bought two standing tickets for himself and his wife and I bought three sitting tickets for myself, Gillian and my friend  Owen.  Wasn’t ideal but Gillian wouldn’t have been able to stand for this one so sitting was the best option.

But circumstances then changed when Niki’s wife was expecting.  So we swopped tickets.  I took the standing ticket and Eleanor took the sitting ticket and joined Gillian and Owen up in the stands.

Support on the day came from Dublin band, The Radiators and Snow Patrol.  This was Snow Patrol post Final Straw and they were in the process of making their new album.  We got the live debut of Chasing Cars that day which would then become the song we picked for first dance when we got married.

U2 were in top form and it was a brilliant show.  This was my third time seeing them and second in Dublin.  Previously saw them at the RDS in 1993 and Botantic Gardens in 1997.

In August, the Tennent’s Vital festival as getting bigger and we got Kings of Leon coming to Belfast for the first time.  Kings of Leon also played Dublin as well but they got Pixies for support.  We got Faithless for support in Belfast.  To say I was disappointed was an understatement.

However, I was at this gig with friends so seeing that they were playing Belfast there was no way anybody was going to make the trip to Dublin.  So Belfast it was then.  Kings of Leon were definitely getting bigger.  Only a few years earlier I got to see them play the tiny tent at Witnness.

The Prodigy came back to Belfast in the autumn and played at the Odyssey Arena for the first time.  The last time I saw them was at the  Kings Hall and that gig was a real eye opener for me which introduced me to the band proper.

This was part of a greatest hits tour called Their Law.  They didn’t disappoint and I really enjoyed it.  Was definitely a step up from the Kings Hall gig in the 90s and the Odyssey was definitely a great venue for them.

I cannot remember who was the support act for that evening.

The next gig is definitely one of the strangest I have ever been too.  Since starting this blog, it has really been wrecking my brain as I cannot find any information on this next band anywhere.

Anyway, this gig was definitely Gillian’s choice but I remember why it was because her friend Laura had just recorded an album and was doing a support slot at the Empire in Belfast.  She was supporting a band called Gimik.

I don’t have much recollection of the gig apart from enjoying Laura’s short solo set but the band Gimik I don’t remember too much so I started to search online.  There was a band with the same name in the 70s from Ireland, so it definitely wasn’t this band.  Further searching on the internet finally led me to the band and they were a local band who were much akin to the pop punk of Busted and McFly.  Probably explains why I couldn’t remember them too much!

They were on tour for their  fifth studio album, In Your Honor which was a double album featuring a disc of the band’s regular rock sound and another with acoustic rock tracks.

Foo Fighters never disappoint live but this was definitely the last indoor show that I saw the band play.  Every other gig I got to see them since would all be outdoor as they kept getting bigger and bigger.