The new year didn’t kick off with the traditional NME tour in 2004.  There wasn’t one coming to Ireland that year so January was a very quiet month for gigs.

February turned out to a be a busy month.  First up was a visit by Black Rebel Motorcycle Club to Mandela Hall.

BRMC had just put out their third album Howl and it was good to see them back in Belfast.  They always put on a good show and post-millennium they have been one of my favourite bands.  I would look forward to seeing them again in the future.

The following evening  I went along to the Limelight to catch the Ataris.

I had picked up their album So Long, Astoria after listening to one of their tracks on free CD given away by Kerrang magazine and I liked what I heard.  Free CDs on magazines back then were good ways of checking out a band if you were not sure if you would like them before investing your money into buying the record or CD back in the day.  They were a good band and I really liked them.

At the end of February, it was time for Muse to make their Belfast debut.  I had been listening to Muse since picking up Showbiz and they have been firm favourites of mine.  Having previously seen them live in Dublin I was really looking forward to their first visit to Belfast. 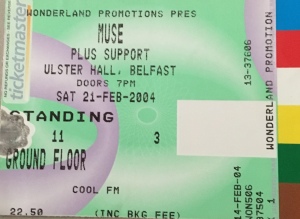 Their third album, Absolution had been released in 2003 and is one of my favourite albums.  This gig at the Ulster Hall was just astounding.  Quite possibly the best gig I have seen there and I have been to quite a few.  If I was going to do a top 10 favourite Ulster Hall gigs poll this one would definitely be up there.

There were a couple of gigs in March, one around my birthday as Hundred Reasons came back to Belfast to play the Limelight. 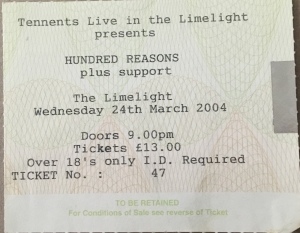 It was good to see them back in Belfast again.  Their rise went from Limelight to Mandela and then back to the Limelight.  This would be the last time I would get to see the band.

A couple of days later, Snow Patrol would play Mandela Hall.  Prior to the release of Final Straw the band had put out the first single from the album, Spitting Games in 2003 which hadn’t done very well.

The second single Run released in February 2004 suddenly became a sleeper hit and propelled the band to stardom.  The gig at Mandela Hall showcased the band on the way up.

I have to admit this was a very good gig.  I don’t speak highly of the band now which is a discussion for another blog down the line but those early gigs are definitely the memorable ones.

April was also a busy month of gigs with Ash being the band to see more than once!  First up was a trip to Dublin to see the band play at Temple Bar Music Centre.  This was like Dublin’s version of the Limelight and it was a very good venue.  Support came from fellow Northerners, The Answer who were different to Ash in terms of their style.  They were very much in the classic rock vein but were fantastic live.

A few days later the band played a surprise show at their hometown in Downpatrick as part of their 10th anniversary.  The gig took place in Downpatrick Arts Centre.

Support for the Downpatrick gig came from a local band from their old school which Mark Hamilton was managing.  Their name escapes me but I definitely remember they had a nu-metal edge to their sound.  Even played Rage Against The Machine’s Killing In The Name complete with swearing and their parents were in the audience!

Last gig of April was a visit to my first ever gig in Lisburn at the Island Arts Centre to see Derry’s finest band since the Undertones, Jetplane Landing who were doing a gig to promote Alternative Ulster Magazine.

I was a big fan of Cuckoo who released a fantastic album in the 1990s.  From the ashes of Cuckoo came Jetplane Landing who were brilliant.  I spoke to Andrew Ferris at the gig telling him how much I liked Cuckoo and he was pretty pleased to hear that. Support came from local bands Torgas Valley Reds and Yazuka.

Celebrating 10 years of Ash continued during the month of May with a trip over to London to see them.

It was a good excuse to head over to London for the weekend and visit some friends.  We got tickets to see Ash at the Carling Apollo in Hammersmith which was a wonderful Art Deco venue in London and was the biggest London gig the band had done to date.  A brilliant venue to see Ash and they were in great form.

The month of June was pretty busy too.  First up was a visit to Dublin to see Red Hot Chili Peppers at Phoenix Park.  Now I wasn’t too impressed with their show at Landsdown Road a few years previously and this gig was no exception.

Main draw for me was Pixies who had just reformed and were doing a reunion tour.  Tickets were hard to get for these shows so I settled for seeing the band as support to Red Hot Chili Peppers.  Definitely wasn’t the best time to see them as you could hardly get anywhere near the main stage to really enjoy it.  To say I was disappointed was an understatement.

Anyway back to Red Hot Chili Peppers and this was really a big low as far as going to gigs was concerned.  The band were terrible and it felt like a completely phoned in performance.  The audience wasn’t much better either as quite a lot of people didn’t know any of the older songs they performed and would end up building human pyramids.  Needless to say this put me off the band and I have never went to see them again.

Brushing off the disappointment from that gig, a few days later New Zealand’s The Datsuns came to Belfast for the first time bringing their garage rock racket to the Limelight.  Now this was a better gig.

I finally got to fill the final piece of the Big Four jigsaw when I got to see metal legends Anthrax at the Ulster Hall.

Having previously seen Metallica, Slayer and Megadeth, it was Anthrax who were the one band that alluded me and it was great to see them live at last although this wasn’t quite the original line up.

Final gig of the month was My Morning Jacket at the Limelight.  This was my first attempt at trying to listen to alt-country or Americana as it is normally known as. 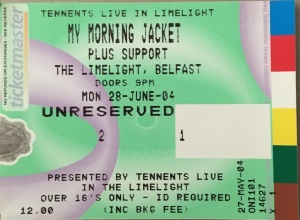