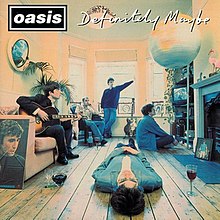 With the up and coming 25th anniversary of the classic Oasis album, Definitely Maybe which is being rereleased on Friday 30 August I thought it might be a good idea to look back at both the album and their Belfast debut at the Limelight.

Definitely Maybe was released on 29 August 1994 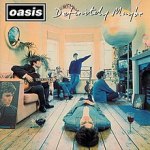 and Oasis arrived in Belfast on 4 September 1994 to play at the Limelight.  It was there that they found out before going on stage that the album went to no.1 in the UK album charts Noel Gallagher interview Belfast Telegraph.

Before Oasis came to Belfast my friend Eddie suggested a gig to go to.  Want to go and see Oasis he said.  Who are they was my reply.  And guess what?  We never bought tickets for it!  Looking back on it I think this was one we missed.

Across The Line for BBC Northern Ireland did a documentary on this gig.  I have attached a link to it. Oasis at Limelight

So we missed the gig but this lead to interest in the band.  At the time I was still heavily into grunge and American alt rock in general.  But somehow post grunge and especially after the death of Kurt Cobain everyone’s attention was being turned towards Britpop which was just starting to take off with the arrival of Oasis as well as other British bands like Pulp and Blur.

I purchased the album and it immediately became a firm favourite of mine which never left the CD player.

It is still my favourite Oasis album and I finally got to see the band live two years later when they supported REM at Slane Castle.

For me interest in Oasis waned after the release of What’s The Story Morning Glory which is another favourite of mine.  It was the release of the third album Be Here now which killed it for me and funny enough I started to listen to Blur after that.  Previously I was in the Oasis camp and then switched to Blur!

Overall it is still a classic with iconic singles Live Forever, Rock and Roll Star, Shakermaker, Supersonic, Cigarettes & Alcohol and Slide Away.

I think this weekend I may take a trip down memory lane and give it a blast.