That year was a busy one festival wise.  As well as doing the normal weekend festivals like Witnness in Ireland and back to the Reading Festival in England, 2002 saw the first arrival of Ozzfest in Ireland and for the first time Belfast getting it’s own festival with Tennent’s Vital.

So onto my first metal festival.  I had followed with interest over the years the Monsters of Rock festival at Donnington Park.  One for the bucket list I think, maybe one day if the Download line up is good enough to make it over for.  Ozzy Osbourne brought Ozzfest 2002 to Punchestown Racecourse with two different stages for the bands.

I went down to this one on my own.  My friend Eddie lived in Trim which wasn’t too far away so I was able to stay at his house for this one. 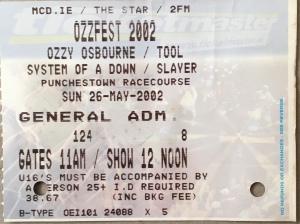 When I got to the gates everyone was hearing the news of Ozzy’s cancellation.  He had been unwell during his performance the night before at Donnington so on doctor’s orders he had to withdraw from the Irish leg of the tour.

We had the option of getting a full refund if disappointed and not go in or we could still use our tickets.  Well I wasn’t going to let my ticket got to waste as there were other bands on the bill I wanted to see and I wasn’t too peeved about Ozzy’s non-appearance.

So in I went and what a day I had.  On the main stage, Tool took over as headliners.  The metal Radiohead they have over been dubbed.  It was great to finally see them at last but they are not everybody’s cup of tea it would appear.  They filled the headline slot very well but throughout the entire performance, Mynard James Keenan had his back to the crowd the entire time and you could only see the shadow of him on the onstage backdrop.

Also on the main stage were System of a Down who were amazing.  They really got the crowd going.  Slayer were awesome as well.  I still get goosebumps listening to the intro to Raining Blood.  They played that during daylight but you could still feel it.  Local heroes Therapy? were also on the bill too so it was good to see an Irish band up there.  I also had a look at some of the smaller bands playing on the other stage – Skindive, Hell is for Heroes and Superskin.

Witnness 2002 took place in July instead of August that year which was now a permanent fixture change from here on in.

I was heading down to this one with my friends Kenny and Paul.  We got camping tickets but Paul wasn’t able to go and that left me and Kenny going with no tent!  All was not lost though as Kenny knew somebody down that part of the world and we were able to stay with them.  Sure beat camping as that weekend would go on to become a complete mudbath!

Getting to Fairyhouse Racecourse was mayhem.  It took ages to get to the site and with the weather getting really bad and the rain coming down quite heavy it sure wasn’t going to be  sunny weekend!  The queues were also bad for getting the tickets changed to wristbands which meant you were missing bands that had already taken to the stage.

By the time we got in it was nearly mid afternoon and missed quite a few bands.  Jimmy Eat World were on stage when we were finally getting through the gates.  All the timetables had sold out by this stage so it was nearly guest work trying to work out who was due on.  I think I managed to find a timetable from one of the papers that was lying around so that was good to work on.

With conditions so bad, one of the stages was starting to sink in the mud.  On the Saturday we ended up mainly on the main stage and the first band we got to see were the Hives who were doing their best to brighten up the proceedings.  The Frames got promoted to the main stage at last following their two indoor tent performances from the previous years.  Biggest regret was going to see Green Day which resulted in people rolling around in the muck and chucking muck into the crowd.  Kenny managed to get hit on the back of the head with some of it.  Looking back on it should have went to the Rising tent to see Sonic Youth, at least there would have been no muck flying around.

We also had a look at the dance tent for shelter but it was pretty busy.  Kosheen were playing but there was no way in.

The Prodigy were the main headliners but by this stage it was getting a bit too much in the rain and mud that we stuck it out for Foo Fighters before heading back to base.

Sunday was a better day as it had brightened up a bit and the rain stopped.  Straw was being put down to cover the mud which was doing the job.

The job to lift everybody’s spirits was bestowed to The Polyphonic Spree!  The white robed massive were becoming your favourite new cult band.  They definitely brought much needed sunshine to the weekend.

The second stage was useable on the Sunday and we took in quite a lot of bands on that stage.  We got to see Rival Schools, Copper Temple Clause, A, Less Than Jake, BRMC before heading over to the main stage to catch Primal Scream  the only band we saw on the main stage.

After that Oasis were headlining the main stage.  Neither of us had any interest in seeing them so the for last bands of the weekend we split up – Kenny headed over to the second stage to see Basement Jaxx and I headed over to the Rising tent to see Idlewild.  With the weekend now coming to a close we headed back to the car and it was bedlam trying to get out!  We finally made it out and Kenny drove us home leaving all the muck behind!

Last big summer festival was a trip over to England for the Reading Festival.

With most of my friends having moved over to London to work and live this was the perfect festival to go to.  Taking place over the August bank holiday weekend there was a lot of bands to see at Reading over two days only.  We only booked tickets for Friday and Saturday only missing out on Sunday.

Unlike the previous visit to Reading in 2000 we managed to get in without bunking the queue.

So Friday kicked off with the The Soundtrack of our Lives.  We decided to stay at the main stage for Mercury Rev, The Dandy Warhols and The White Stripes before heading over to the Radio 1 stage to see The Vines who were the buzz of the weekend.  Were we witnessing possibly the new Nirvana?  Not quite.  They were good but just not as good as Nirvana.  Back to the main stage and we caught the tail end of Weezer’s set.

After that a downpour started just before Jane’s Addiction came on.  I was the only one that wanted to brave the rain to see them while everyone buggered off to shelter.  After that I lost everyone and was down at the front on my own for both Pulp and The Strokes. I finally bumped in the rest of the guys after The Strokes.

Saturday we did make it to one of the smaller stages and saw The Eighties Matchbox B-Line Disaster and what a good band they were.  Very entertaining.  Back over at the main stage we saw Andrew WK, followed that it was A and then the Hives who were much better here than they were at Witnness.

Always a pleasure to catch an Irish band at a festival and it was great to see Ash.  Don’t often do this at gigs but I ran into the crowd and in a wake of that caused a massive moshpit which I was pulled into!  We lifted up Mark for a spot of crowd surfing and he ending up going all the away to the barrier!

Big decisions had to be made for the next two bands – Muse on the main stage or Jimmy Eat World on the Radio 1 stage.  It was a 50-50 split so I was away to see Muse while the others went to see Jimmy Eat World.

Closing the Reading festival on the Saturday was Foo Fighters who had finally got to the top slot.  From humbled beginnings in 1995 in the Radio 1 tent to the big stage.  Foo Fighters had definitely arrived.

Within two weeks it was time for a festival in Belfast.  Tennant’s Vital 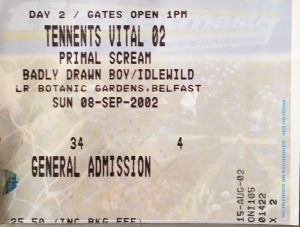 was created that year over the space of two days we had a dance day and a rock day at the Botanic Gardens.  This festival was not on the sheer scale of U2’s appearance in 1997 but a much smaller one to start off a first festival in Belfast with the gigs being inside a big tent.

I had no interest on day 1 so I went down for day 2 as it appealed to me more.  It had been raining the day before so it was a bit a muddy outside.  Inside the tent it was fine.  Local band Snow Patrol opened up the proceedings.  They would go on to be future headliners.

The rest of the bill also included Idlewild and Badly Drawn Boy.  Primal Scream were the headline band and what a set they performed.  It was absolutely amazing.  Very heavy on the strobe lights but it created a great atmosphere within the tent.  One of the best gigs I have been too.

It was great that Vital was a great success as it would lead the way for future two day events in the city.