After the disappointment of seeing Garbage at the Big Day Out in Galway the previous summer, they made their Belfast debut at the King’s Hall on 15/01/99. This time a more enjoyable performance compared to the rushed one in Galway. Support that night came from Moloko.

Placebo came back for another visit to the Ulster Hall promoting their new second album. Support came from Idlewild who I got to see for the first time. Idlewild were no strangers to the Ulster Hall having supported Ash there the previous year but I must have missed them that time.

Placebo were good, but I think Idlewild stole the show as they were brilliant. Not often do you get to see the support act upstage the headliners. So good were Idlewild that I went out and bought their album the next day.

3 Colours Red played a fantastic gig at the Limelight on 17/02/99. The band were enjoying success with their single Beautiful Day which was their biggest hit. A great band who sadly broke up later in the year.

I was enjoying quite a lot of the Brit rock bands at that time and Terrorvision came along to the Empire on 12/04/99.

The next two gigs were Belfast’s answer to the Heineken Green Energy festival in Dublin. Branded Guinness Live, there was a series of gigs over the May bank holiday weekend. I won tickets to see Reef at the Ulster Hall. They were brilliant and support came from A.

The second gig was in Botantic Gardens which was headlined by Catatonia with support from The Cardigans. Both bands I was enjoying at the time. I also had a ticket to see Catatonia in Dublin and that was the first ticket that I had ever bought that went to waste as a friend pulled out at last minute and I didn’t want to travel on my own for it. At least I got to see them in Belfast.

I got to see Stereophonics at the Ulster Hall on 06/05/19. This was after the bank holiday and not connected to the festival. Stereophonics had just released their second album. Me and my friends went back stage and we met the band afterwards getting tickets singed. We found out from them that they would be back in Ireland over the summer playing at Slane Castle supporting Robbie Williams. Wasn’t that keen for that one!!

First trip south was another visit to the RDS by Bruce Springsteen on 25/05/99 this time with the E Street Band. This was the first time I had seen the E Street Band with Bruce and me and my friends were right down at the front for this one. We were right under big Clarence Clemons on the saxophone and we were giving him the you are not worthy salute. Big Clarence nodded to Bruce and pointed in our direction! Would love to have had a photo of that one! No mobiles back then. 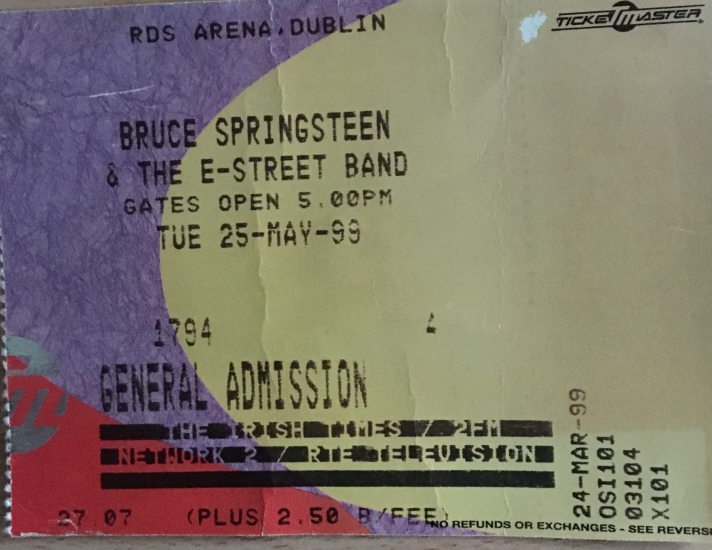 I will give Glastonbury a separate mention in the festivals section. Manic Street Preachers made their King’s Hall debut on 22/06/99. A warn up gig ahead of their headline slot at Glastonbury. Support came from Super Furry Animals who would also be appearing at Glastonbury too.

Following a triumph slot at Glastonbury, Mercury Rev came over to Belfast on 29/6/99 to play an intimate gig the Limelight. This was one of my favourites ever shows there. They were amazing.

In July, I had another two trips to Dublin. First up was Metallica back at the Point on 5/7/99 with Monster Magnet in support and then back down again on 16/7/99 for REM at Lansdowne Road.

November had me back in Dublin again for two gigs at the Olympia. The first was for Suede on 5/11/99. This was the first time I had ever seen Suede. A bit late to the party they put on a great show. Great live band.

Whilst in Dublin I managed to get tickets for James on 29/11/99. James were fantastic live. Tim Booth is an incredible front man and so full of energy. They played lots of hits that night. Also, in the VIP section in the Olympia were Bono and The Edge from U2. Taking photos on mobile phones was a long way off at this stage!

In a round about way I started off liking Oasis and couldn’t stand Blur, but I suddenly found that I was starting to like Blur more than Oasis! Think Song 2 did it for me, but it was Blur’s headline slot at Glastonbury in 1998 that won me over. This was branded the singles tour and they took to the stage the Waterfront in Belfast. A strange venue for Blur as I thought they should have played at the Ulster Hall. 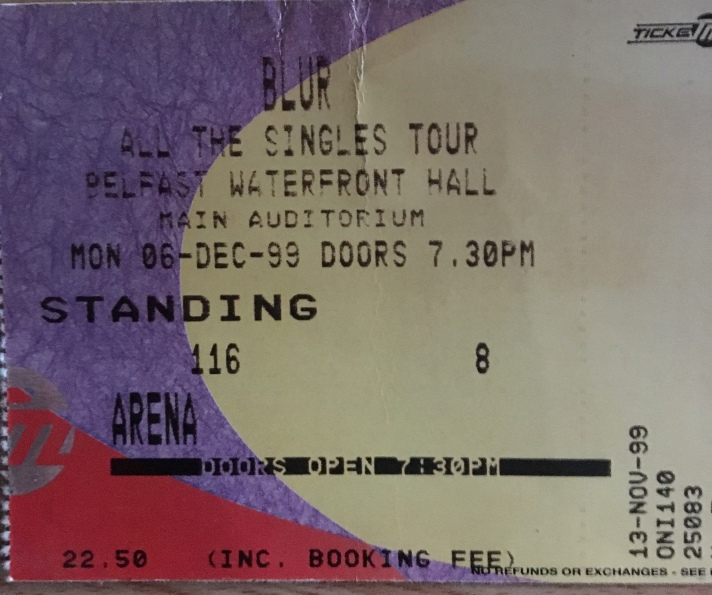 The last gigs of the year were all spent in London. This was my first time going to London for gigs and I was over to stay with my friend David who had just moved over. We took in two gigs at Wembley Arena to see James (12/12) and Stereophonics (13/12). The final gig was Ben Folds Five at the Royal Albert Hall (14/12). Royal Albert Hall was an amazing venue and our seats were right up at the top. Not great if you have vertigo!